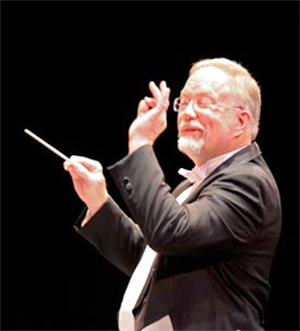 Stephen J. Ramsey is in his 34th season as the founding music director/conductor of the Dakota Valley Symphony where he conducts the Symphony, the Symphony Chorus, and the Summer Pops Orchestra and Chorale. A well-known conductor in the Twin Cities area, Maestro Ramsey has also been music director and conductor at the Austin Symphony Orchestra (Austin, MN) for 26 years, 10 years with the University of Minnesota Health Sciences Orchestra, and 3 years with the Willmar Area Symphony Orchestra.

A well-known conductor in the Minneapolis-St. Paul area, Ramsey has led performances at many area colleges, concert halls and churches. He has served as music director and conductor for the Minneapolis Jewish Community Center's Chamber Orchestra, mixed and women's choruses and their Genesis Theater Company, Chimera Theater, Lakeshore Players, Anoka-Ramsey Community College, and Applause Community Theater. He has also been the director of ensembles for Hamline University and the Conducting Associate of the St. Paul Civic Symphony.