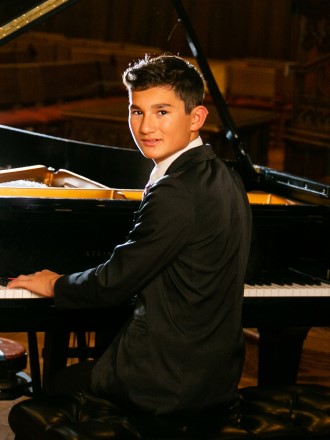 Jacob Taggart, at only fifteen years old, has already established a career as a successful classical pianist. Marked by an engaging and energetic personality, his daring interpretations have captivated audiences and juries across the United States and Europe.

His prowess has already been recognized with top prizes and awards in multiple major competitions. As a solo artist, he has received first place in the Great Composers International Competition, the Young Artist Scholarship Competition, and the Golden Valley Orchestra Young Artist Concerto Competition. He also remains one of the youngest winners ever to capture the grand prize of the preteen division of the MN State Fair Amateur Talent Competition. Most recently, Jacob was awarded first place in both the Dakota Valley Symphony and LaCrosse Symphony Concerto Competitions. He will appear with both orchestras later this season.

Jacob also performs as the primo member of his sibling piano duo Taggart Squared, alongside his sister Emma. Together, they have performed hundreds of concerts and appeared on some of the nation’s most prestigious stages. They have been featured twice on National Public Radio’s From The Top, debuting two of Emma’s original arrangements. They appeared in 6 feature concerts alongside the Minnesota Orchestra, playing Saint-Saens’ Carnival of the Animals. And most recently, they received 1st place in the West Central Division of the MTNA piano duo competition, as well as an invitation to compete at the national finals during the MTNA National Conference in Spokane, WA.

At only age 7, Jacob attended his first festival, the Accademia Tadini International Music Festival, in Lovere, Italy, where he played a solo recital, and made his orchestral debut, playing the Bach Concerto No. 5 with the Milan Chamber Orchestra. In 2017, he attended the Grand Piano in Palace International Piano Festival in St. Petersburg, Russia, where he was awarded the Grand Prix and performed Mozart’s Concerto No. 9 in E-flat major, K. 271, with the Chamber Orchestra of St. Petersburg.

Jacob has performed in masterclasses with Anderson and Roe, the Unison Piano Duo, and Vincenzo Balzani. Outside of the classical world, he has been featured on stage at Paisley Park and Orchestra Hall with Sheila E., Grammy-nominated singer, and Prince’s former drummer and fiancée. He has also opened for the iconic rock band, The Goo Goo Dolls.

Jacob is in 11th grade at St. Agnes High School in St. Paul. He began lessons with Dr. Reid Smith of Dellwood at age four and continued with Reid until his recent passing in the summer of 2021. Jacob now studies with Dr. Paul Wirth at the Wirth Center for the Performing Arts.